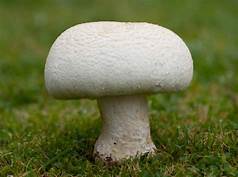 It is a kind of mushroom. This mushroom can be cooked and eaten and is a very tasty mushroom. Delicious omelets, soups, etc. can also be made with these mushrooms.

This species of mushroom is commonly known as horse mushroom. However, it also has a scientific name, Agaricus arvensis, which is also known as a botanical name.

Before using this type of mushroom, it must be checked whether it is a horse mushroom, as most of the mushrooms look the same and some of the species are poisonous.

These horse mushrooms can be seen between July and November. They prefer nutrient rich soil and germinate from the soil.

Cap: The cap of this horse mushroom is about 9-21 cm in diameter. The cap turns white at an early age but gradually turns yellow with age and becomes smoother. This cap initially looks round and extends until it becomes flat. Its flesh is thick white and firm. Then the part of the cap where the wound occurs is yellow again.

Gills: The gills of this horse mushroom are initially pale pink and later turn brown. In fact, these horse mushrooms are a kind of free crowd.

Stem: The stem of this mushroom is parallel and has a bulb at its base. It also has a stiff double ring at the bottom. The stem can be as long as 9-10 cm. These stiffeners are smooth on the top of the ring but sometimes smooth on the bottom.

mushroom horse species agaricus nature writing india
19 days ago by anima0167
W$0.97
2 votes
Reply 0
Authors get paid when people like you upvote their post.If you enjoyed what you read here, create your account today and start earning FREE WEKU!