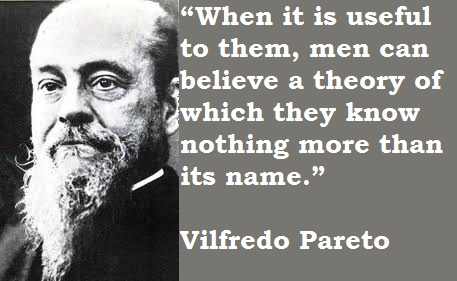 In the war against objective truth the Left would have us believe that truth, like morality, is subjective- something arrived at by a consensus of some sort. To any thinking person this causes a plethora of problems, not the least of which is that no culture can survive without a sound moral foundation. In the moral morass of the Left, the truth is whatever is convenient, or expedient at the moment- or whatever they feel it is at the time. Rights based on feelings in this subjective dystopia, trump facts every time. The "right" not to have one's feelings hurt is paramount in the world of the perennially offended. This not only leads to social chaos and outright confusion, but results in what George Orwell termed "doublethink," believing two opposing views to be right simultaneously... something Orwell described as being either "insane or evil." The Left lives perpetually in this paradox box, unable or unwilling to exercise critical thinking to free themselves.

We are told, by the Left, that matters of right and wrong are situational.  They change with the times, with cultures, or with other conditions.  They reject the idea that there are eternal, objective standards to which we are all obliged to conform, regardless of our personal opinions or preferences.

In addition to, or perhaps because of this doublethink, selective outrage is a primary weapon of the left manifested in vicious and often violent attacks on anyone who dares to disagree with their orthodoxy. This is a war of ideology vs. reality, hypocrisy vs. objectivity, and falsehoods vs. truth. Driven by what Winston Churchill described as "the politics of envy and greed," these are malignant narcissists wishing only to appear morally superior rather than being moral themselves... exhibited in virtue signalling as evinced by activists with camera-phones documenting in detail their feigned outrage. These are merely ugly incompetent actors, acting out roles in this bizarre theater of the damned. I've selected a series of videos to accompany this article that bolster as well as help explain the motives and the tactics of the Left.

In this liberal dystopia the end always justifies the means and it's far more important to appear to be right than to actually be right. Browbeating or convincing people into believing in a lie doesn't make it true. This nobility of ignorance is predicated on malignant narcissism... In the words of Tolstoy: "Everyone thinks of changing the world, but never thinks of changing himself." This describes the Left to a tee.

The Left will lie to perpetuate evil in order to claim some nonexistent relativist moral high ground. For example, the liberal media were so quick to excoriate the Covington Catholic boys, branding them as White Supremacists ridiculing and intimidating a Native American Tribal Chieftain. The reality is that the "Tribal Chieftain" is an activist, not to mention a fraudulent Vietnam Veteran who was himself trying to intimidate a group of children. This is the hypocrisy of the Left, they depend on the apathy of normal people who are too busy working, paying bills, etc., to pay attention to their attack. In a world dominated by sound bites they use snippets of selective outrage in an attempt to mainstream their odious agenda... with the complicity of their fellow travellers in the mainstream media.

The end justifies the means which means it doesn't matter how many lives and reputations are destroyed in their narcissistic world fueled by their own myopic selfishness. When confronted, they head for their safe spaces while screaming victimhood. Ideology trumps reason in the world of freedom from, rather than freedom to, as proffered by those who embrace liberty and individual freedom. In the Leftist ideology, groupthink reigns- perhaps because they're incapable of reason. All they have is their tired mantras repeated over and over again with mind-numbing repetition. Their hypocrisy shows in their contradictions... they favor freedom of speech, as long as it's speech they agree with. None of their tropes are more hypocritical than "tolerance and inclusiveness." The Left is the most intolerant ideology in existence, eclipsing even the Nazis perhaps. "Inclusiveness" only includes their own ilk. To show the falseness of their ideology, they openly embrace Islam, many of who would kill the homosexuals they revere, while demonizing Christianity who professes love for all. They live in a house of cards built on lies.

The of the inherent follies of the Left is their hubris... they believe that groupthink and doublethink are the solution to the world's problems. They depend on their own wisdom to counter thousands of years of experience and history. As the old saying goes- those who fail to learn history are doomed to repeat it- after all, feeling good at the moment is far better than producing good for the future. The Left lives in a world of instant gratification, so immersed in their own hubris they either can't see the the damage they're doing, or they simply don't care. When you're so dazzled by your own brilliance, there is little room for introspection. Isaiah 47:10 tells us:

"You felt secure in your wickedness and said, 'No one sees me,' Your wisdom and your knowledge, they have deluded you; For you have said in your heart, 'I am, and there is no one besides me.'

The sense of a vital connection to a divine Creator has apparently left many who, “wise in their own mind,” pretend to outwit their Creator. Hitler, Stalin, Mao and other monsters of history were stalwarts of that persuasion, proving how deadly “reason” can be when disconnected from morality.

This is the future we face if America doesn't once again find some moral courage and step up decrying these narcissistic charlatans. A man named Leonard Peikoff wrote a book called The Ominous Parallels in which he traces the evolution of American society and its similarity to what led to the infamous Third Reich. Time is running out. Generations of American schoolchildren are being taught that right and wrong are subjective to the whims of the "wise," in this case their teachers and pop-culture celebrities with no moral compasses.

People have known the importance of recognizing evil and responding to it with a moral backbone, not with the brain or with the emotions. Classic literature provides ample illustration of the need to resist evil. Dante unmasks evil dramatically in his Inferno, where those who love what is evil and hate what is good -- whether by choice or weakness -- exact their own destruction and that of those they take down with them. This is the heart of Christian morality, lost to the modern mind.

"The wise men are put to shame, They are dismayed and caught; Behold, they have rejected the word of the LORD, And what kind of wisdom do they have?

The false wisdom of the Left is no wisdom at all. They are self-absorbed charlatans doing the bidding of the wicked one, while professing to be "tolerant and caring."

Our country is in the grip of mentally and morally empty men and women, in the service of “elites” whose unconcern for fellow human beings disqualifies them from being leaders. Yet they steer the nation toward outcomes that their powers of reasoning do not tell them are inhumane, simply because they are unnatural, unrealistic, and out of sync with justice. Some officiate at world conferences on sociopolitical strategy, acting for governments in fatuous efforts to “save the world” -- from their own mistakes. Some, calling themselves journalists, go to bed at night thinking they are “making a difference,” while unreported criminal activity soars, schoolchildren get their minds warped by political correctness, and millions of babies are killed before and after they are born -- to scratch the surface of what mainstream reporters won’t touch.

I'll leave you with this:

For the wages of sin is death; but the gift of God is eternal life through Jesus Christ our Lord.

Spot on. I can't think of anything to add. This is some of the most important information the world needs to know.

Thank you, I wish I could take credit, but the videos told ne about everything!